His nudges are somewhat forceful, could get worse 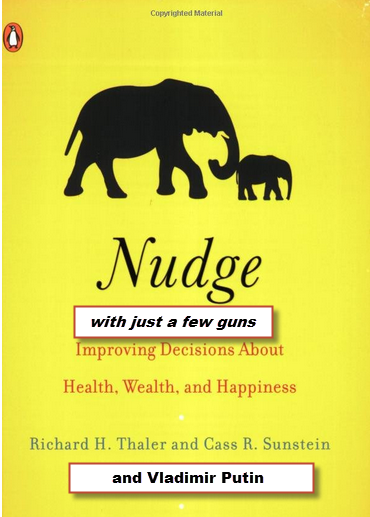 Like everyone else I'm trying to figure out what's going on in Putin's head. He assembles the military force to conduct an invasion of Ukraine and then sits there, giving Ukraine's sad-sack military six weeks and counting to get ready. Maybe it's the sad-sack part he's counting on, although I'd expect there's a cost to it. This recounting of untrained cannon-fodder sent to guard the border, OTOH, doesn't suggest the cost currently would be high.

My original explanation was Putin hadn't actually decided whether to invade and the buildup is there until he decides one way or another. That's a pretty stupid substitute for a plan, so I'm somewhat doubtful about it.

So a variation, maybe - he's doing a Nudge Invasion right now with an undetermined number of covert operators, to see if them plus local tough guys plus undetermined number of civilian sympathizers are enough to take over the province. Then, maybe rinse and repeat next door. The military buildup across the border serves a purpose of heartening pro-Russian supporters while intimidating the Ukrainian government from using force. The invasion forces could actually invade, or not, depending on how the situation unfolds and whether Putin ultimately decides the price is right.

I disagree with claim that this a repeat of Crimea - that was a barely-covert invasion, and although the locals were mostly supportive, their help wasn't essential. I see it somewhat similarly to our defeat of the Taliban - our military forces swung the decision but the locals did the fighting. It's unclear to me still how many Russian soldiers are operating in the province, but they can't be the majority of the occupiers.

As to what we should do, my latest is that we should be arming Ukrainian forces, covertly, and secretly let Putin know we're doing it and that they'll get more as he gets worse. We should also be flying Ukrainian troops out of the country 500 or so at a time, training them for two weeks, and rotating them back. But what do I know.

One other relevant factoid - much of the Russian military-industrial complex relies on eastern Ukraine. It's not something they can give up easily. I hope Ukraine continues to sell Russia whatever they've ordered while this all plays out.
Posted by Brian at 4/24/2015