Does acidification overcome the one PhD theory?

My pet theory is that no matter how ridiculous a concept may be, you can find at least one person with a PhD in that field who will advocate it (e.g., a microscopic number of biologists who are creationists). So where are the marine biologists who don't think ocean acidification is a significant concern?

You'll find researchers who publish an occasional piece of good news about marine life adapting to acidifying oceans, but I'd like someone to show me a marine biologist who has gone on to make the general conclusion "meh, acidification isn't something to be worried about."

Maybe I've just missed it, that marine biologist is out there and can rescue my pet theory. Or maybe they just haven't seen the value in being the next Bozo Galileo. I think the climate denialists rarely get paid for their services but this person might be one of the exceptions. The psychological reward is still more likely, some level of acceptance of their heroism.

UPDATE:  see John and John comments below for a range of opinion re whether climate denialists are "rarely" paid. I agree with John that the issue is partly definitional. Probably worth its own separate post, but I think a useful context is the anti-fluoride activists and 9-11 Truthers - there's even less money to be made in their fields, and they're still legion, even if the latter group is declining.
Posted by Brian at 2/28/2014

Blegging re human ability to taste the change in ocean acidity

I can't find the answer - anyone care to enlighten me? Please comment.

Reading around about acid manipulation in wine-making suggests this level of pH change is detectable to taste, but I'm not certain, and that's also starting at a very different level of acidity.
Posted by Brian at 2/28/2014

As good as it gets: patriarchy and Mitt

Taking the sympathetic documentary Mitt at face value, it shows a patriarchal culture at its very best. The women in these men's lives are loved and respected, and their counsel taken as seriously as the men's, but they're not the deciders. I also thought it was interesting that the wives of the sons made it into the inner circle, as did some male outside staff, but no female outsiders. That's the one point I'll make that I haven't seen in other reviews. I don't know enough about Obama's campaign to know if a similar documentary would've looked different, but I hope so.

Beyond this, I'm not sure what to make of this portrait of a nice, self-aware, and unassuming man who lied and lied and lied and who, if he had been successful, would have semi-wittingly killed thousands through his actions on Obamacare and climate. It would be interesting to know more about the documentarian Whitely who filtered what we see, and why Romney's fellow Republican candidates in 2008 despised him so much.

Hypocrisy: not the worst sin, but maybe the most amusing

Rand Paul on whether Hilary Clinton should be president:


“You know what’s funny about it is I tell people – they’re like, ‘Why did you bring up the Clintons? Why did you bring up Bill being such a predator and sexual harassment and what he did with an intern in the workplace?’” Paul said. “I said, ‘Well, because they asked me the question'....One of the things we have done that is a step forward, has been over the last couple of decades is women should be protected from predatory behavior of their bosses. And that’s what Bill Clinton’s affair, whatever you want to call it with an intern was, was sexual harassment.”


He added, “It’s not Hillary’s fault, but it is a factor in judging Bill Clinton in history.”

He added with Bill and Hillary Clinton, “Sometimes it’s hard to separate one from the other.”


And then there's Rand Paul on people judging him over his long relationship to big ol' racist aide Jack Hunter:


He added that it was “unfair” to suggest that he should be painted with a “broad brush” because of the actions of his former aide.


Bonus quote from Paul: "hypocrisy defeats their whole argument." I wouldn't beat yourself up like that, but I agree it doesn't make you  look good.
Posted by Brian at 2/28/2014

Thought I'd take a break from checking Rabett Run every half hour for Eli's groundbreaking post on or after February 30, and write about something else.

Obama's in a bind on Keystone, with the State Department finding that it won't have much of a climate effect because the oil would otherwise just get out by rail and get burnt anyway. Keystone proponents will say his "own experts" are saying that it passes the test Obama set for it.

If Obama wanted to kill Keystone he could consider saying that outside experts and even some government experts disagree, but I'm not sure that limits the political damage that much. We could say, so what? Absorb the political hit and save the planet, but that's not a sustainable political strategy. You save it for special occasions.

I think the best messaging Obama could use if he struck down Keystone is that whether the tar sand oil stays in the ground is a political assessment - whether the other modes for moving oil will receive political approval, whether a delay might result in changed Canadian policies just as American policies have changed, and whether the uncertainty over future oil prices is reason enough to stop the approval. Combine that with Obama's message that while we need to use fossil fuels, we should only use the cleanest fuels and there's no question that this stuff doesn't qualify, and he might have a viable political message.

UPDATE:  two additional points. You think Keystone is bad for the climate? Here's what's somewhat worse - a slightly smaller amount of tar sand oil exported by rail. Enviros are betting on a significant decrease in tar sand oil exports in the absence of the pipeline, or else things become even worse than otherwise.

The other is that this issue will still be alive, regardless, for at least part of the 2016 presidential election. If Obama approves Keystone, then resolving inevitable litigation will take at least a year or two, plenty of time for candidates to be asked to weigh in on the litigation and what to do about it. If Obama kills it, some candidates in 2015 will say it's not too late to reverse his decision. I think in reality that January 2017 may be too late, but people might not realize that during the initial part of campaign season.
Posted by Brian at 2/28/2014

Figure of the day

Regional temp and precipitation changes for two scenarios in 2100, from Week 2 of the Climate MOOC: 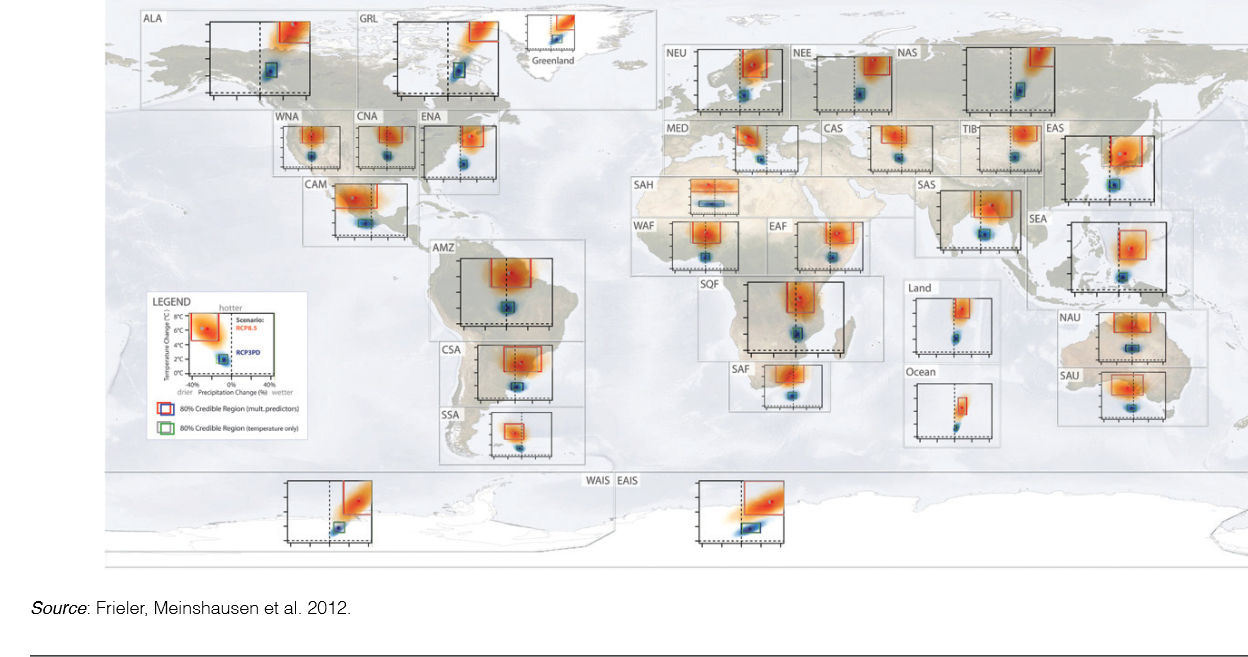 Being a water guy, I'm focusing on the precip. Central America is screwed. And sell any farmland you own in the eastern Mediterranean basin.

If that increased precip in the western Pacific is from storms instead of steady rain, that could be unpleasant. Something China might want to consider.
Posted by Brian at 2/28/2014

Not sure what our scientist readers will think of this, but I expect lawyers and scientists might get grouped together and distinguishable from the general public when thinking about the Woody Allen allegations (latest here, good summary of the evidence here).

I'd say a reasonable conclusion based on available evidence is "probably guilty". Lawyers and scientists can stop there, but I think much of the public can't, at least those who care about it. They have to think he's guilty or he's innocent - it's not acceptable to believe there's a 90% chance he's guilty, a 9% chance his daughter was manipulated into a false memory, and a 1% chance she's outright lying.

Lawyers and scientists may reach this outcome differently - lawyers think about process and advocacy more than an objective truth that's separate from process, and modern scientists think about models rather than truth - but get to the same result. At least that's my purely anecdotal sense.

One good aspect of this recent publicity is it helps rebut the concept that a legal presumption of innocence has to apply to how individuals think of these issues. A welcome further step would be dropping any presumptions and live in doubt.

Not that doubt has to be blind. There's nothing to doubt about the child-rapist Roman Polanski, and multiple independent allegations against Bill Cosby don't leave much room for doubt.
Posted by Brian at 2/28/2014 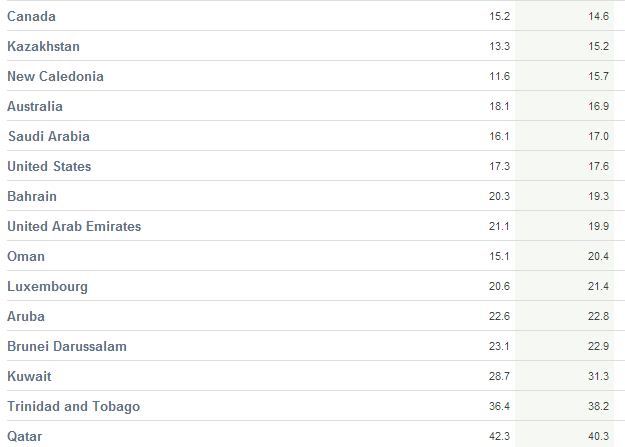 Anyway, the course seems worth checking out. I'm too lazy to do the essay portion though so no certificate for me.
Posted by Brian at 2/28/2014