EV costs at a tipping point for un-American countries 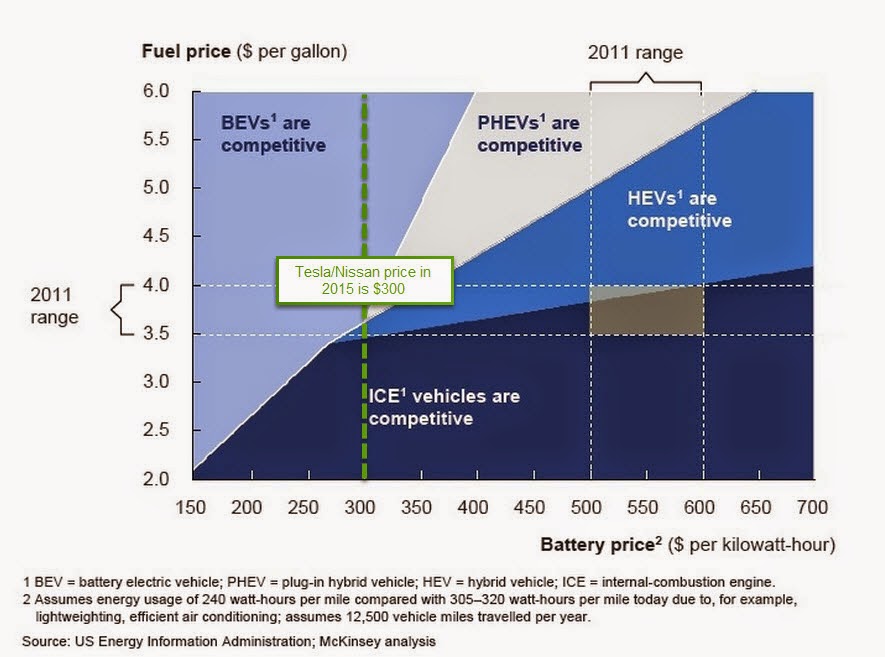 Bloomberg reprinted the above graph from a 2011 McKinsey report, and I added the green line for where we are today. Bloomberg adds the info that we weren't supposed to hit $300 until 2020 and that the market leaders are already there.

Bloomberg goes on to note the obvious fall in gas prices so that currently, all EVs are less competitive than they were in 2011. A person buying a car today might think twice though about whether gas prices are going to remain low.

What I thought missing from the discussion is the existence of developed countries not named United States of America, because of a little thing called the gas tax. In most of them, the price is over $4.50 (and also in many developed countries that don't produce oil). Forget the US - for the rest of the world, the tipping point is here.

Sadly though, I'm not aware of EV purchases in the rest of the world matching this prediction. Part of it could be that Nissan Leafs and Teslas simply aren't cheap for other reasons, and they need more development and more competition to knock down prices. The other and more depressing factor is that people aren't economically rational and may discount the future savings from not buying gas more than they should. Or just not be able to finance.

Overall though it's good news, and it should be interesting to watch overseas EV sales in the next few years.


UPDATE:  some good comments worth checking out. One point was that in countries with high gas taxes the electricity is also often expensive. I'd agree, but I doubt it come close to making up the difference.

Another point was about electric bikes - if you put them on the chart above, I think they'd win under any circumstances, and they'll do even better as batteries improve. Developing world countries are building and rebuilding their cities and towns on a much more massive rate than developed nations, and they have a real opportunity to center personal transportation around electric bikes, not cars.
Posted by Brian at 4/26/2015