Happy Thanksgiving, everyone in the US and everywhere else. Seems like a good time to note we've found a way to step back from yet another war, a good thing to be thankful about. Political stuff below - please skip it if you don't want to deal with that on this holiday.

Moving away from war seems good, except to the Republican leadership, who see no success with the interim deal. They've forgotten that if somebody's trying to get something you don't want them to get, then delaying them is generally a victory for your side. And this is more than a delay - the highly-enriched uranium will be processed into an oxide form that is at least an additional step further away from being useful for a nuclear bomb. So six months from now, Iran will be (slightly) further away from a bomb than they are now, and with much more extensive verification. Seems preferable to me over an ongoing program of blowing up large chunks of Iran now and repeating every two or three years as a politically-united Iran rebuilds its nuclear program.

So not much learning on that side of the fence, but I'm not sure the left is much better. Juan Cole's been my go-to expert on the area (I suppose I should like his recent emphasis on climate but I don't think he brings nearly the value added to that as to the Middle East). He strongly supports the deal, but has also strongly opposed the sanctions that made the deal possible. His opposition stemmed partly from the valid argument that they impose real hardship on Iranians, but also from the very dubious claim that they make war more likely, and from the legally ridiculous assertion that western use of financial tools to block oil sales "is a financial blockade, and blockades are acts of war." Nothing in his recent posts indicate a reassessment of that position.

So everyone's prior assessment was right, and the new information about the success of the approach they had opposed doesn't change anything.

And then there's yours truly. I fell to somewhat to the left of Obama, repeatedly buying Seymour Hersh's statements over the years that the US was just a few months away from starting an air war in Iran. I considered it crazy to attack Iran, and contra Obama, that living with a nuclear Iran was better than a bombing campaign. I still think that's true, but the question is whether the threat of a potential attack added to the pressure created by sanctions to get Iran to this agreement.

It seems likely to me that the military threat helped more than harmed the process to agreement. Iranian hardliners may have welcomed an attack as a way to weaken internal opposition but they don't seem ascendant now. So maybe Obama was right about making the threat. Actually carrying through on the threat is a different matter - you are allowed to bluff in this game, although you need to do it carefully.

Anyway, as with the case with the narrow issue of chemical weapons in Syria, we're in something close to a best-case scenario. Thankfully.
Posted by Brian at 11/30/2013

Interesting article in Nature on 20 weird tips "to improve policy-makers' understanding of the imperfect nature of science" and reduce belly fat. It's good although even better IMNSHO would be directions on how to choose between dueling experts. I'd guess they'd say just discount the experts that run afoul of the most tips.

First few tips are straightforward in theory if not always so in practice, and need no comment. Moving on, regression to the mean and extrapolating beyond a data range strike me as things that smart people don't always understand. Replication versus pseudoreplication is also good - a replication that repeats the same errors in the original study, e.g. not accounting for confounding factors, will just give the same bad results.

Separating no effect from nonsignifance can be huge, and appears to be what drove the stupidity over whether the Oregon Medicaid study showed insurance resulting or not resulting  in improvements in health outcomes. I would also add to the tip "significance is significant", the coda "except when it's not."  Just do enough studies and you'll eventually trip over the 5% threshold due to repeated dice-rolling. That's what gets us cancer clusters (or many of them, anyway), and over multiple decades may even result in global temperatures temporarily going below or above the 95% confidence levels.

Cherrypicking and risk perception also are pretty obvious, but such a huge problem that we really need tattoos.

Scientists are human and become biased, yes. The one trick I'd add from the legal profession is the declaration against interest - if one of the expert's statements goes against what the expert would like to conclude, it's more likely to be true.
Posted by Brian at 11/30/2013

Delayed blogging here, but thought I'd call out an initiative to fund $20 million annually for a decade to create hydrogen fueling stations in California. This should create 100 new fueling stations - currently the state has nine that are open to the public.

Maybe I'm being too skeptical, but electric vehicles have a huge leg up on hydrogen and still confront an enormous challenge getting an adequate infrastructure in place, so I have strong doubts about whether this will work. Still, they should try it. Maybe the range advantages of hydrogen will help it catch up with or complement electric vehicles. A price of $20 million annually for something that has enough of a chance to be beneficial is worth it.

Absent the potential fraud issue, Solyndra represented a similar, reasonable investment. It didn't work because the technology costs didn't work as expected. You need to spread your bets when you're dealing with a difficult investment. Other bets, like with Tesla, seem to be going well.
Posted by Brian at 11/30/2013

Last week I listened to a Commonwealth Club podcast about Syria from early September, where I heard their invited speakers make retrospective fools of themselves as they poked fun at how the Obama Administration "boxed itself in" on chemical weapons in Syria.

Hearing their predictions of a fiasco on that issue prompted me to write about my own predictions on the outcome of civil wars, which don't seem that great. I can give myself some slight credit in the summer of 2011 when the mainstream said the Libyan war was at a stalemate, I thought that temporary victories by the government obscured a long term advance by rebels. That's pretty much it in terms of good predictions (written down somewhat late) - I could see an existing trend but not a change in trend. Seven months before that I said Qaddafi would be out within a week. My Libya wrap-up concluded that Assad would win in Syria. By July 2012 I acknowledged my pessimism about Assad was wrong but then thought it looked like the rebels were slowly winning. That too was wrong, as we see in the screwed up stalemate today.

My only defense is that I don't think my predictions are worse than what you'll find in the MSM. I welcome links to someone who got predictions consistently right, and made them early. Meanwhile I think it's still useful to make predictions - the people who make policy recommendations without predicting what results will come from those recommendations aren't adding any value.

Keeping track of those predictions and eating some crow as appropriate is still required, though.

UPDATE:  more Commonwealth Club, more foolishness about Syria and chemical weapons. This time from the moderator, Janine Zacharia, former Wash Post Bureau Chief. Even more depressing was the Israeli consul, who outright refuses to believe that the Arab Spring could be remotely about a drive for democracy as opposed to basic instincts of an honor-driven society.
Posted by Brian at 11/30/2013

Pics and video from last week 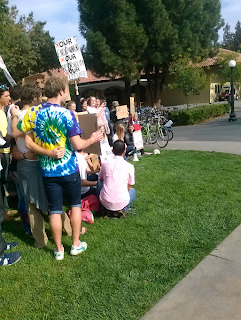 I attended a student rally on Monday at Stanford to promote climate divestment, about 40-50 students there. Not too bad. Their Facebook page is here.

Video from the rally.

Republican politicians are soft on crime

1. Opposing attempts to get innocent people out of jail means letting the guilty run free. Eschaton and LGM covered this recently (the Texas Monthly story is incredible).

2. The Bush Administration decreased enforcement of environmental and white collar crimes, and you can expect similar results at state levels.

3. Republican elites hide behind pretenses of defending individuals from overzealous prosecution while serving the worst corporate excesses. Read this Redstate article on Criminalizing America - not once is protecting lawbreaking corporations mentioned. I stopped and read while skimming Redstate because of the name of the author, alecstates. Anything from ALEC deserves special attention and admiration. Read the actual model legislation and its slightly clearer that requiring intentional breaking of the law, and not just intention to commit the act, is meant to make it incredibly difficult to prosecute a corporate entity. That particular proposal apparently traces back to the Texas Public Policy Foundation, part of the Kochtopus.

(And it goes without saying that Obama should have pushed much harder on financial crimes related to the Great Recession, although it looks like some things are finally happening.)
Posted by Brian at 11/30/2013 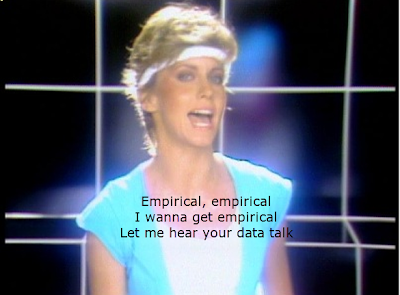 The case for climate divestment in one sentence

Investors in fossil fuel companies make profits by imposing climate change on the world's most vulnerable, and on everyone else.