As a California resident, I can tell credit bureaus to deny all access to my credit information. I did that today - it costs $30 but is a pretty good guarantee against losing money from ID theft (except from my existing credit cards, and maybe bank accounts). The only problem is that Republicans in Congress are trying to overturn this state-level protection (I wonder if they'll give me my money back), but it's here for now.

So that was one of my New Year's resolutions. Others include:

These aren't research-related, just being tourists. 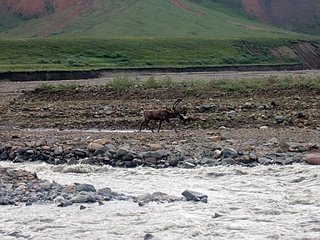 Denali Park - backcountry had no trails. We had to cross the river in front of the caribou to get to our next glacier, and several other rivers. This river was the toughest - the only one where the current was too strong to stand and fight it. Instead you "flow" downstream with it and hope you don't stumble. It's glacier runoff, a few degrees above freezing. 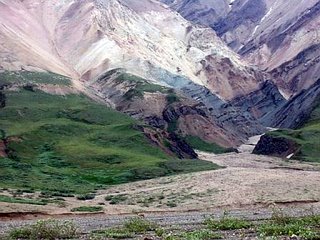 Looking down into a valley with beautiful rock layers on the far side (and a tiny caribou at the bottom). For some reason I seem to appreciate geology more as I get older. No idea why. 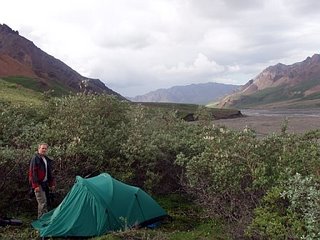 One of our campsites. 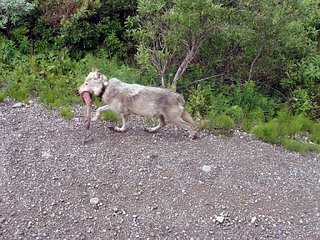 Riding the bus in Denali at the end of the backpacking, a wolf walked by the bus carrying a caribou leg to her pups. She's the alpha female of her pack, and has been rado-collared for study by the park biologists.
Posted by Brian at 7/30/2006 No comments: 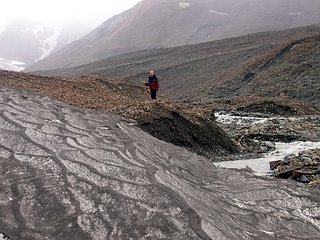 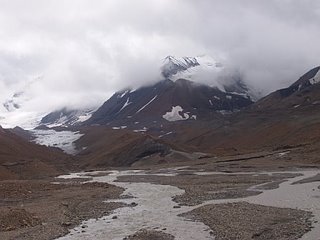 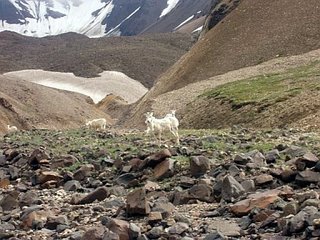 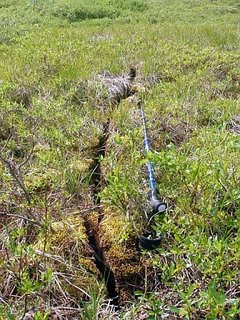 This is a weird crack in the tundra (also included to show there's a lot of greenery at Denali). I've seen the tundra torn up before by landslides, but this one looks like someone took a knife and cut it cleanly. I have no explanation for it.
Posted by Brian at 7/27/2006 No comments:

Gyrating around No Se Nada

Kevin V. has a well thought-out post warning against technological fixes to counteract global warming, and I disagree with much of it. In particular, my policy conclusions lie on Kevin's political right, for reasons that lie on his political left.

Kevin thinks the unforeseen consequences of a poorly-understood attempt to create cooling technological forces acting on the climate could be catastrophic. No disagreement from me here, but I disagree when he adds that it's lunacy to consider doing it. My reason for disagreeing is that I think the consequences of not acting against global warming will be catastrophic, while Kevin doesn't place it at quite that level. Given our different perception of the scale of the global warming problem, I'm willing to consider risky solutions that Kevin won't.

OTOH, Kevin's point, "God forbid we should actually deal with the risk of anthropogenic climate change by dealing with the root causes" is spot on, but America won't allow the world to do it (and nobody's flocking to my trade-agreement solution for this problem). Given the lack of political will, we may have to take risks.

Finally, Kevin suggests the mostly-urban First World is more at risk from catastrophe than the agrarian Third World. I guess I'd agree if we're talking about serious fire-and-brimstone, Lovelockian catastrophe. I think more likely, still very bad scenarios will drive down the margin of comfort and safety in the First World (and kill thousands in storm events), while more-catastrophically upping the mortality level elsewhere.
Posted by Brian at 7/26/2006 No comments:

Over at Stoat, an anonymous commenter claiming to be a paleoclimatologist and "of course" a skeptic of anthropogenic global warming says he/she has been regularly winning bets on 1:1 odds that global temperatures won't exceed the 1998 average (a year where temps went way up because of El Nino).

I need to give this commenter a name. I have no idea who the person is, so I'll just use the name "Car Bobter". Bobter has a good idea in the form of serial betting, which if done in the form of increasing bet amounts would increase the confidence that the losing side will pay off the winning side.

I hope I can be forgiven for thinking maybe Bobter's story about betting isn't true, but I have posted comments at Stoat asking to join Bobter's betting club (without result). I've since learned that 2006 is looking like the sixth-warmest year on record - i.e., very warm, and additional proof of climate change, but unlikely to be warmer than 1998. I'll keep my 2006 bet offer open to Bobter for just a little while longer as part of a series of bets, but for anyone else, the first bet year will be 2007.

(I do recognize that given the randomly-high temps in 1998, the bet is somewhat chancy, but with enough years in the mix then I think 1:1 odds should work out okay for me.)
Posted by Brian at 7/24/2006 No comments:

I grew a beard over my vacation and as usual, became an object in the Beard Wars. The women who like beards (it's always women) come out and say how much they like it. After the beard comes off, the other side takes the positive-reinforcement field, and the women who didn't say anything before now say how nice a clean-shaven face looks, while the first group stays quiet. Kind of amusing.

(Of course, the first group may mean "I like the beard - that way I see less of your face," while the second may mean "glad you got the rat-nest off your chin," but they never say it that way.)
Posted by Brian at 7/21/2006 No comments:

I had wondered earlier why so many people were Googling Benny Peiser, the dishonest British academic/global warming septic. Meyrick Kirby traces it to Richard Lindzen, who also peddles some garbage of his own ("Since about 1970, many of the glaciers have stopped retreating and some are now advancing again." Got a reference for that gem, Richard? Especially a statistically meaningful reference?)

Anyway, Meyrick ferrets out more of Peiser's mistakes. What we need is a credible effort to replicate the search of peer-reviewed abstracts for the opinion on global warming. Peiser's work very much doesn't cut it.
Posted by Brian at 7/20/2006 No comments:

(Note: I'm back from vacation, will post about the glaciers soon.)

My view of Israel is generally the most left-wing stance of any of my political views besides population control - I think Israel's treatment of Palestinians is abominable and an affront to Judaism, and a cause of many of Israel's current problems. The current crisis is different though. Cross-border attacks on Israel after the country bugged out of Gaza and Lebanon are clear acts of war. Regardless of whether Israel is using the captured soldiers as an excuse, the refusal to return them gives Israel a reason to continue its actions. Israel is showing little concern for civilian life, but in practice warfare hasn't cared too much about that. It's acts are probably well within typical just war theories.

Whether they're good policy is a totally different question though. The weekend NYTimes argued this helps Hezbollah preseve its military identity as something separate from the fragile Lebanese state. Israel is unlikely to permanently occupy Lebanon again, and Hezbolloah would benefit if it does. Other than temporarily destroying Hez missile supplies, I see only a small chance of gain that would depend on whether the Lebanese believe that the Palestinian fight isn't theirs also, and that Hez stuck its nose in something not its business.

Jonathan Zasloff has a different idea - that Israel should take take a tiny slice of Syria in retribution for what its client, Hezbollah, is doing. I like innovative ideas, and this avoids the traditional civilian bloodshed. Whether it's in Israel's interest isn't clear though to me - that would depend on the countermeasures Syria has. Not military countermeasures, of course, but whether Syria is holding back Hez or other terrorist groups, and can make things even worse in retribution for losing territory.

What IS clear is that it's not in America's interest for the Quneitra option to happen. If Israel can go after the patron of the enemy that attacked it, Syria should have the same option and go after us. Syria's middling cooperation on terrorism issues could change in a far worse direction.

It's important to keep the different interests straight.
Posted by Brian at 7/18/2006 No comments: