An apex predator in our worm composting bin 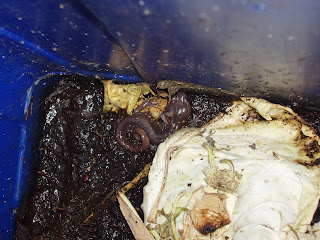 Not sure how well the picture shows the salamander, but now I know why we don't have many worms in our worm composting bin. Aside from the question of how it got in there, I can't figure out where it came from. We live in an urban/dense suburban area, and the nearest water body is a concrete channel for a stream about a quarter mile away.

I also don't know what the heck it is. It's bigger than the California newts I see in the woods around here, and has a big head. Instead of the newt's orange underbelly, it has yellow spots along the side and scattered on the tail.

Finally, I don't know what to do about it. We're near the beginning of the summer dry season. I expect if I dumped it out of the bin, it wouldn't last very long. I suppose I could make the effort to carry it to the concrete stream. For now, I'm doing nothing. Maybe the compost bin ecosystem is big enough to support it and some worms.