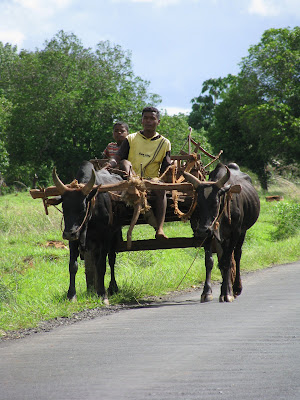 So we were short term visitors with just a superficial understanding of the place, but it's hard to understand why Madagascar is one of the fifteen poorest countries in the world. It's not overpopulated, so far - we drove and hiked for many miles through areas that weren't desert with absolutely no one there. Socially, it doesn't feel like a violent or crime-ridden country either, not compared to the rest of Africa or Latin America. And compared to India and Muslim countries I've visited, women seem to have more opportunities and exposure to the real world (far from equal, though). My wife and I both noticed the uncommon-elsewhere sight of men carrying and taking care of babies and small children. And even in rural areas, we saw children going to school, although not in the off-road villages.

I guess part of being a resource-extraction dependent economy is that resource price determines everything. Vanilla can only take Madagascar so far, the original forest is almost all gone, and the replacement eucalyptus and pine might not be very valuable.

Then there are ethnic issues I barely understand. Madagascar was first settled by Polynesians and is culturally and linguistically more Polynesian than African. Genetically it's a mix of African and Polynesian traits, a very striking people. The 18 different tribes have their conflicts, and slavery was abolished later there than in the US, so that is bound to be related to desperate underclass we saw in Tana, the capital city.

And while it's not overpopulated yet, that's changing, with 40% of the population less than 14 years old. They have a lot of challenges ahead.

Economic issues aside, the society is very interesting. Our guidebook said the Malagasy were reserved - I don't know what it's talking about, we thought people were extremely nice and cheerful. The French influence is extremely strong, however much it's resented. The people's striking features, and maybe the low HIV incidence, has the unfortunate result of a lot of sex tourism by French men.

The most unusual societal feature was "famadihana" ceremonies - exhuming and reburying the dead. Initial burials are usually sad affairs, but after several years, the body is exhumed, bones are cleaned and wrapped, and a large party is held during which the dead person is told about all that's happened in the meantime and then reburied. Practices differ by tribe, but it seems like a good way to deal with grief that the rest of us could learn from.

I never saw the ceremony, although we did see the cliffside crypts and caves that are used in the south, and the tombs in the north. There's always something more to see.
Posted by Brian at 1/16/2008

Email ThisBlogThis!Share to TwitterShare to FacebookShare to Pinterest
Labels: Madagascar