Hammurabi versus Huckabee on the history of marriage 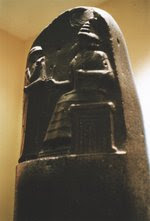 Via the Volokhs, Mike Huckabee says, "Marriage has historically, as long as there’s been human history, meant a man and a woman in a relationship for life."

Volokh uses the Bible to prove him wrong, but we can do even better. My wife and I had a few days in Paris on our way back from Madagascar, and at the Louvre we saw a stele with Hammurabi's Code of Laws, the first known example of law. Here are two of the laws:

138. If a man wishes to separate from his wife who has borne him no children, he shall give her the amount of her purchase money and the dowry which she brought from her father's house, and let her go.

142. If a woman quarrel with her husband, and say: "You are not congenial to me," the reasons for her prejudice must be presented. If she is guiltless, and there is no fault on her part, but he leaves and neglects her, then no guilt attaches to this woman, she shall take her dowry and go back to her father's house.

Hardly fair or modern, but it's an unquestionable recognition of divorce from the very beginning of legal history. Huckabee got it wrong from the start.
Posted by Brian at 1/18/2008