Per Eli's post below, Judith Curry's put up a silly guest post by Rud Istvan saying that climate change poses no water supply problems to Caribbean islands. There are too many fish to shoot as Istvan gishgallops them in the barrel, so let's talk first about where he's right:  if nobody lived on these islands, then there'd be no water supply problems on those islands for those people who don't live there. In fact, a few people could live on those islands and if they always used far less water than the islands provided with a comfortable margin to spare, then again the problems from climate change would likely be minimal. His lamentation that humans are flawed is correct, while his claim that it doesn't count when climate change makes existing problems worse, not so much.

A brief aside:  I've heard a similar claim from far more credible people that climate change's effects on biodiversity is overemphasized because it only adds to other stresses, most notably habitat destruction that keeps species from being able to migrate to new areas. I'm not buying it.

So the main issue is Istvan's claim that if you can draw a line of any length on the earth's surface from A to B without going below sea level and where A is high up, then B cannot have a saltwater intrusion problem. He only references Caribbean islands, but I don't see why the argument doesn't apply everywhere. So his first example was Pico Duarte in the Dominican Republic, at over 3000m elevation: 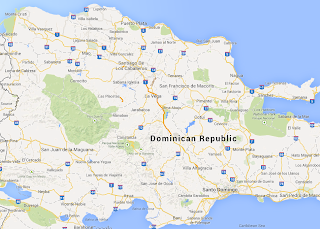 Pico Duarte's also over 100 km from Santo Domingo, and still further away from many other DR cities. Some of the other peaks he mentions are closer to those island's biggest cities, except for Pico Turquina in Cuba, which is closer to Port-au-Prince in Haiti than to Havana. Moving water a significant distance isn't easy, and contra Istvan, it's made harder when the landscape is mountainous.

Examining his claim, you would think California with a top elevation of 4400m wouldn't have a problem with saltwater intrusion, but we do. Los Angeles has been battling saltwater intrusion since 1915, and now spends millions of dollars injecting freshwater and treated wastewater to keep saltwater out.  LA, btw, has significant mountains in the same county over 3000m tall, and still has the problem. LA probably has an advantage over many Caribbean islands in that its complex geology limits where saltwater can intrude.

Freshwater tends to float on top of salt water, which is good when you've got saltwater intrusion deep below ground but problematic if you live at sea level near the coast when sea level is rising. Coastal cities on continents tend to have saltwater oceans in one direction and freshwater-providing land in the other three. On islands that starts to get problematic, especially the smaller islands. Most contamination also occurs in the upper ground, so drawing from your uppermost freshwater because that's all you got raises another set of issues.

Finally, higher temperatures will mean greater water demand, for farming, landscaping, and for native vegetation that limit how much water gets past their roots and into the water table. My water district sees large changes in water demand depending on whether we have a warm or cool summer. In the next few years we plan to calculate how climate change is going to increase future demand, but it's safe to say that Caribbean islands will need more water for human activities while getting less of it in the water table.


UPDATE:  my attempt to comment at Curry's got bounced back. I'll store the comment here for now, pretty much the same as above:

As a director of the Santa Clara Valley Water District in northern California, I would like to inform Rud Istvan that the existence of mountains in a general area does not prevent saltwater intrusion. In Los Angeles, for example, the 3000m San Gabriel Mountains are physically adjacent to the city in the same county, and still they have to spend millions of dollars annually fighting saltwater intrusion. Contrast that to Cuba's highest peak, which is closer to Port-au-Prince Haiti than it is to Havana.

It's also important to note that warmer temperatures increase water demand from both artificial and natural landscapes, which will further depress freshwater tables and increase saltwater intrusion.

Istvan might consider doing further research on these issues before he reaches for what appears to be simplistic conclusions. Climate change makes water supply problems worse as a general matter. Islanders (and for what it's worth, everyone else) may not have handled their other water supply issues perfectly, but that's no excuse to keep greenhouse gas emissions high.
Posted by Brian at 10/31/2013