Have some denial spaghetti BTW, as much as Hansen 1988 has been proven right despite fraudulent misrepresentations of what he said, the first consensus view like this one from 1990 is probably the best place to test consensus predictions.

Anyway, I want to play: 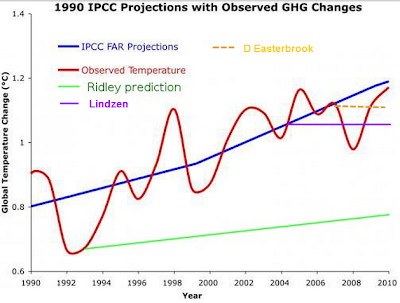 Lindzen is from his 2004 prediction that temps were as likely to go down as up in 20 years, and his offer to bet over that prediction that he ran away from as fast as his denialist legs could take him (by insisting on unscientific odds in his favor). To be fair, he didn't specify exactly what temps would do between 2004 and 2024, but we've eaten a big chunk of that time period already. You could also be more generous to Lindzen than I've been - his bet offer was reported on November 10 2004, I assume it had been his position for at least a little while and picked mid 2004 as the start. If instead, you pushed the start to as close to that 2005 peak as possible, then he might not look that bad to you. If you want to do that, please please let me know that you'd like to bet over it, 3:1 odds in your favor sound great to me.

Don Easterbrook, one of the bad Easterbrooks, said in 2006 that temps would decline "soon" and keep cool until 2040. Who knows what soon means, I assumed 2007. We're over one-sixth of the way through his time period though - a reasonably soon date would've started by now.  I chose a slightly declining slope for his prediction, I'm not aware of him being more specific. And yes, he's also ignored my effort to get him to bet over his prediction.

I'm happy to add others as long as they're at least semi-prominent and claim scientific credentials. Abdusamatov and Sorokhtin both predicted declines starting around 2012, so we can add them soon.

For good stuff on predictions, try the good Easterbrook. I don't consider the Christy/Spencer '95 ref to be a prediction though, it was just wrong stuff about satellites, and strangely for them finds a warming trend (UPDATE:  due to greenhouse effects) of .09C/decade, not all that far off the mark.

For where the models do seem to be getting things wrong, try Stoat's concern about Arctic ice:


even with the junk removed I fear you’d find the obs retreat faster than the models; and I’m beginning to wear thin the idea that this is just a few years anomaly. So, really, we need better models and a better understanding of what is going wrong with the current models.

My unscientific addendum is wondering whether models are getting frequency of La Ninas wrong for whatever reason, pushing more heat into the ocean than expected, and where the heat will get its revenge on us later (when is that, by the way?).