You read it here first (or before these other guys, anyway) 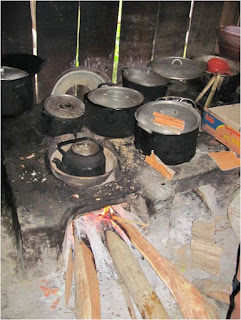 (A little update:  a cooking fire from our Vietnam trip.  Time for biochar instead.)

One.  Eli says in 2009 that the developing world's role in climate mitigation should focus on reducing their emissions of black carbon by 90% or more in a decade, and now we learn that black carbon could be the #2 bad guy in the climate biz, displacing poor methane.  For my part, this is one of the few climate issues where I'm pretty optimistic.  Assuming the peak energy arguments are wrong, then economic development means wood burning cookfires and the like are gradually going to be less prevalent.

Another.  I argued last November that Obama should go big on immigration reform, getting immigrants who've been here for a long time on a reasonable path not just to legalization but to citizenship, and that seems to be what he intends.  Personally I doubt even the less-xenophobic faction of the Republican leadership will really go along with a real path to citizenship, despite the extremely vague statements of some.  To the extent they're obstructive, they'll pay the political price, but to the extent we get new voting citizens, it'll take a while before the Republicans live down their past practices.  Gun control is a good example that extends beyond immigration - the new groups are very supportive, especially Latinos.

A third.  At the same post above in November I did my own little calculation to determine there was only a 52% chance that all five conservative Supreme Court justices would defer escape to the Choir Invisible in the next four years, and last week Slate's slightly fancier look found a 54% chance that none would be no more in four.

Good enough for now.  I could add that Libya is looking good while Syria isn't, but maybe another time.