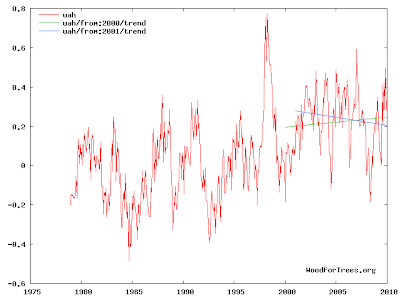 The above image, copystolen from WoodforTrees.org, shows why the denialist technique of cherry-picking short time periods to find a cooling trend is so screwed up. The red line connects measurements by satellite, adjusted by the UAH, for the lower troposphere. The blue line uses that data to construct a trend line from 2001 to 2009, and voila, gives us a downward, cooling trend that skeptics latch onto. Same data except adding a single year, so it's from 2000 to 2009, gives the warming-trending green line.

Too short a timeline give noisy results. Too long a timeline, say from 55 million years ago to today will show a cooling trend, but miss the fact what's happening in the last century. Finding something at a realistic time frame is what counts, and cherry picking short timelines whose results change in a single year isn't a realistic frame.

Bonus blogging: This statement, "“tundra as we imagine it today will largely be gone throughout the Arctic. It may take longer than 50 or even 100 years, but the inevitable direction is toward boreal forest or something like it,” strikes me as unlikely (I was proud of myself for recognizing the picture of tundra in the middle of the post is from Denali Park, though). Much of the tundra is many hundreds of miles north of boreal forest, or up at elevation, or both. It's not going away.
Posted by Brian at 1/18/2010