The climate news hook about record cold is that it doesn't happen much. Also, betting opportunities. 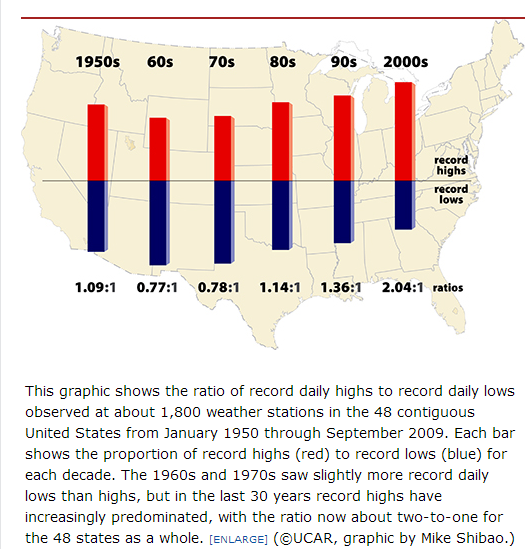 If the blue matched the red, then that might indicate a problem with our understanding of climate change. Occasional deviations, like what we're seeing now, doesn't change that.

The years since 2010 have generally followed this pattern, although 2013 didn't. For one year out of the last 20, record cold exceeded record warmth, but this decade is running at a ratio of 3:1 overall between record highs and record lows. If someone thinks 2014 is likely to have more record cold than warm, let's do a bet.

Speaking of which, via Chris Mooney, I see Fox News' Stuart Varney says we have more of a problem with global cooling than warming. So I sent him this:

Meanwhile, data for the other 98% of the earth's surface would be nice. I probably just haven't looked hard enough. I did find this paywalled Coumou/Robinson/Rahmstorf abstract saying in our warming world record heat is happening five times as often as you'd expect in a non-warming world, so it seems likely there's at least a similar large disparity in heat to cold record ratios worldwide.

UPDATE:  thanks to Steve Bloom in the comments (and Eli) for finding unpaywalled versions of the Coumou et al. piece. The full article doesn't address cold records, but it clearly shows the ratio of heat records is off the hook because of global warming. And per Daniel Wirt in the comments, the climate change effect of a warming Arctic could be shifting the location of the cold, causing our current cold records.
Posted by Brian at 1/31/2014