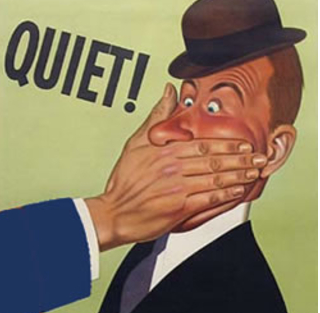 It's from his blog post. He seems to think the hand covering his mouth belongs to Michael Mann, but it's actually his own lawyer's.

Didn't work though, so his legal analyst team appears to have had enough:


They can quit him, it turns out, and the blog post is an indication why. Steyn (or maybe National Review) does manage to keep himself from repeating the f-word about Mann, so that's good. But then:


Up north, following a similar SLAPP suit from the Canadian Islamic Congress, my publisher Maclean's, who are far less ideologically simpatico to me than NR, nevertheless understood the stakes — and helped get a disgusting law with a 100 percent conviction rate first stayed by a hitherto jelly-spined jurist and ultimately repealed by the Parliament of Canada.

Having already dissed the judge he had before his current one, he then writes above that the Canadian judge who actually gave him a success is a "hitherto jelly-spined jurist." Current judge Weisberg now knows what thanks to expect even if he eventually rules in Steyn's favor, given that anything short of exactly what Steyn wants at any time constitutes "jelly-spinedness".

Steyn wonders why he's not supposed to talk about the judge, and fails to realize that not bad-mouthing your own judge in your own case where the issue is whether you defame people recklessly isn't the same as his made-up claim that people aren't supposed to criticize judges generally. He appears to have judgment issues.

And there's this paragraph:


I take the view that I'm entitled to say the same thing in Seattle as I would in Sydney or Stockholm, Sofia or Suva. But, were Dr. Mann to prevail, it would nevertheless be the case that his peculiarly thin skin and insecurities would enjoy greater protection under U.S. law than they do in Britain, Canada, Australia, and other jurisdictions. It would thus be a major setback for the First Amendment.

That's a ridiculous comparison of libel laws, btw, where public figures like Mann have much more trouble winning in the US than England. Mainly though I think there's finally an undertone of something less than confidence in the trial outcome. Maybe he's waking up.
Posted by Brian at 1/31/2014