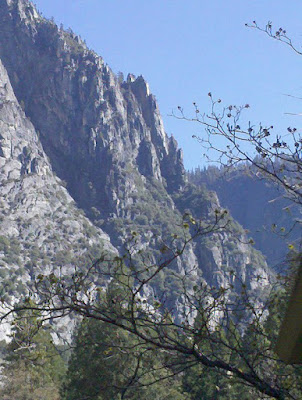 I can't let William have all the climbing fun, although he did beat me by taking climbing pictures with actual climbers in it. Anyway, centered here against the skyline is the big, old-time climb we did last weekend in Yosemite, called Arrowhead Arete. It begins in the shadows above the green band of trees and more or less rises on what looks like near-white rock from this distance, going all the way up to where the white rock disappears into a shady pinnacle. Six rope-length pitches no harder than 5.8, according to one guide book, but what the old-timers thought was only 5.8 and what I consider 5.8 are very different things.
I don't know how the heck they did it in 1956 with hemp ropes and thick hiking boots that wouldn't fit into the thin cracks that ran the route. OTOH, the guys that first did it were incredibly strong and incredibly good, and there we diverge.
My partner is a much better climber and led the hardest parts, but I did lead two 5.6 pitches on the route, including the seventh pitch of 5.6 traversing that our book neglected to mention. It was easy stuff, but on a knife edge ridge less than two feet wide in a few places. We also exceeded expectations by taking longer to hike there and to climb than the book anticipated, which meant descending mostly in the dark, including four rappels in darkness and two of them under a waterfall from a small stream (not as nice as it sounds).
Great climb though! Other climbers I don't know took good pics. Here's one of the knife edge, and another of the downward looking view (including Arrowhead Spire that we didn't climb).
We did some other, easier climbs as well. Nutcracker, which I climbed once before and took my only significant lead fall three years ago. No lead fall this time, although I did have to rest on my protection gear and also had to whine about a few parts that were wet. (Pics by various peoples here.) And another called Doggie Deviations that was very nice.
Nicest of all - no climbing crowds! That's a weird thing for Yosemite.
Posted by Brian at 5/06/2010